The Portland Press Herald quoted Rick Wahle, director of the Lobster Institute and research professor in the School of Marine Sciences at the University of Maine, in an article about Falmouth native Noah Oppenheim’s efforts to fight climate change. Oppenheim, executive director of the Pacific Coast Federation of Fishermen’s Associations, is helping crab fishermen on […]

The Portland Press Herald quoted Rick Wahle, a professor of marine biology and director of the Lobster Institute at the University of Maine, in the article, “Researchers find new way to convert lobster shells into durable plastic.” Researchers at McGill University in Montreal are creating plastic from chitin, a material present in the exoskeletons of […]

Richard Wahle, a professor of marine sciences and director of the Lobster Institute at the University of Maine, was quoted in a Bloomberg article about the lobster industry and the trade wars affecting it, and factors contributing to lobster population decline. Wahle’s American Lobster Settlement Index has revealed a noticeable drop in the population of […]

Down East magazine published an article focused on research conducted by Richard Wahle, a professor in the University of Maine School of Marine Sciences and director of UMaine’s Lobster Institute. After more than 30 years of ever-increasing landings, the Maine lobster catch plunged 16 percent in 2017, and scientists and fishermen are concerned that it […]

Maine Public mentioned the University of Maine Center for Cooperative Aquaculture Research in an article about American Unagi, an elver growing startup founded by Sara Rademaker. The center, located in Franklin, provides facilities and resources for entrepreneurs to conduct research and development and grow their aquaculture businesses. Rademaker raises the eels in the center’s recirculating […] 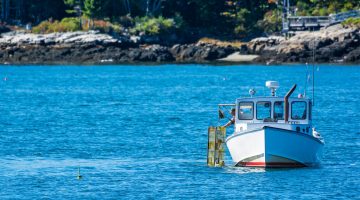 Maine fishermen hauled in 110.8 million pounds of lobsters in 2017 with a value of more than $400 million. While still incredibly large, this volume represented a 16 percent decline and $100 million loss compared to previous years of record-setting landings. Since the late 1980s Maine’s lobster landings have multiplied six fold, while the area […]

Maine Public interviewed Heather Leslie, director of the University of Maine Darling Marine Center in Walpole, about a new ocean conservation database she helped create. Leslie worked with a team of researchers to design the Conservation Planning Database after realizing there was no central location to share information about ocean conservation, Maine Public reported. “This […]

An international team of researchers, including Heather Leslie of the University of Maine, has released a new tool for assessing ocean conservation. The Conservation Planning Database project is a free, peer-reviewed online resource for conservation scientists and practitioners to understand how marine conservation has been approached in various places throughout the world. “This database gives […]

Wiscasset Newspaper and Fisherynation published a University of Maine news release announcing the new director of the Lobster Institute. Richard Wahle, a UMaine marine sciences research professor, has been named director of the institute, effective Sept. 1. He succeeds Robert Bayer, who has directed the institute since 1995 and is retiring from UMaine this year. […]

Wiscasset Newspaper published a University of Maine Darling Marine Center news release about the third annual SEA Fellows Symposium. The August event featured the work of 22 undergraduate students and was attended by more than 80 scientists, industry professionals, resource managers and interested citizens. SEA (Science for Economic Impact and Application) Fellows is an undergraduate […]