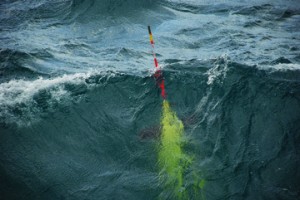 Using the latest in optical sensor technology, marine scientists from the University of Maine and the University of Washington have achieved unprecedented documentation of a critical phenomenon that occurs during the spring phytoplankton blooms in the North Atlantic that feeds the deep ocean and contributes to carbon dioxide sequestering.

During what’s called an aggregate flux event, phytoplankton growing on the ocean surface form layers of aggregates and sink, providing food for deep sea ecosystems and a carbon cycling function vital to the global atmosphere.

Despite the importance of aggregate organic carbon flux, scientists have struggled to estimate it. Formation of phytoplankton aggregates depends on such factors as particle concentration, movement and “stickiness,” and their concentrations can vary greatly in space and time.

The ability to detect aggregates for months to years at a time has the potential to inform estimates of carbon flux in the ocean and modeling efforts.

On a three-month sub-polar research cruise in 2008 to study the spring North Atlantic phytoplankton bloom in the waters south of Iceland, the researchers used optical sensors on four autonomous underwater sea gliders and aboard ship to collect data on the flux event. In particular, they studied the optical “spikes” that the aggregates caused in the signals of the low-power optical instruments during the height of the diatom bloom.

In addition to the sink rates, the optical spikes in the signals of the 10 optical instruments also provided information on the distribution, relative abundance and chlorophyll content of aggregates in the study area.